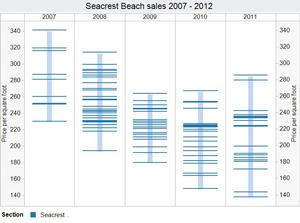 Click on image below to see the full size graph 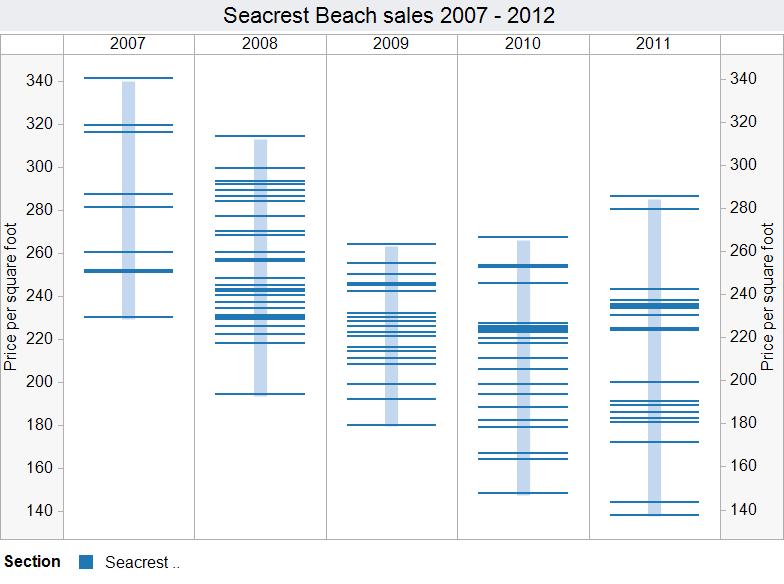 After the two percent per square foot fall in 2010 to 2011, prices have remained steady at $209 throughout the remainder of 2011 and 2012. One-third of the twenty homes sold in 2011 were distressed sales. Although one-third of the home sales in 2012 were also distressed, there were thirty-two homes sold in 2012, showing an increase in sales volume.

Four of the thirty-two homes sold in 2012 closed in December. Two of the homes sold at $227 and $228 per square foot, above the average cost, but of the other two homes sold, one sold just below average at $208 for a standard sale and the other sold at $158 for a short sale.

Year 2013 Seacrest Beach home sales have begun with costs per square foot above the prior two years. One home sold for $210 per square foot while the other home, which was adjacent to 30a, sold for $280 per square foot. Considering two of the above-average sales from December 2012 and the two from the beginning of 2013, it could be that the market might be on an upswing.