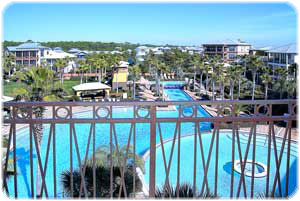 Search for condos in Seacrest Beach 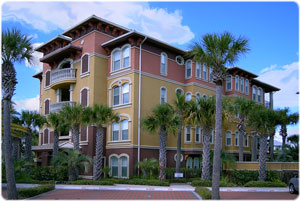 Click below on any of the units to see the floor plan. 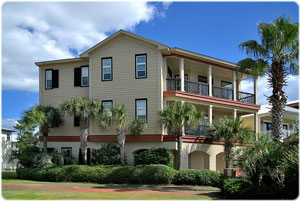 On the north side of the 12,000 square-foot lagoon pool is Villas Del Sol. At Villas Del Sol, there are two units located within the same building. Each of these units has an accompanying garage, which is directly below the units. This makes the building three stories tall, with the garage on bottom and the two units stacked on top of the garage. Both of these units have the same floor plan, which features three bedrooms, 3/1 bathrooms and 1,840 square feet of space. Unit 101 is the unit right above the garage, and unit 102 is on the top floor. 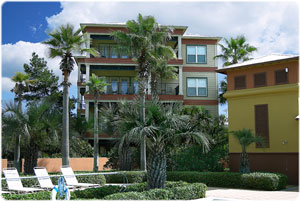 Sable Pointe East is on the northeast corner of the lagoon style pool, and all of the condos featured at this location are within a single, four-story building. There are only four units at Sable Pointe East. Even though these units are listed as having identical 1,975 square-foot floor plans that feature four bedrooms and 3.1 bathrooms, the unit on the first floor has a smaller closet in the master bedroom and less square footage overall. The units are numbered from 101, which is the unit on the ground floor, to unit 104, which is the unit on the top floor. 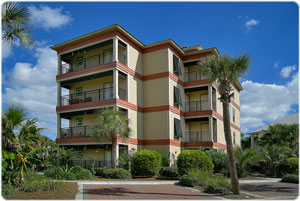 Sable Pointe West overlooks the southwest corner of the 12,000 square-foot lagoon pool, and just like Sable Pointe East, it contains four units within a single, four-story building. With the exception of the unit on the first floor, which again has a slightly smaller closet in the master bedroom and slightly less square feet overall, these units also contain 1,975 square feet of space with four bedrooms and 3.1 bathrooms. As in Sable Pointe East, the units are Sable Pointe West start with number 101 on the first floor and go up to 104 on the top floor. 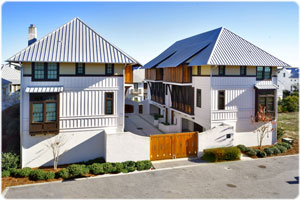 The name translates to "at peace" in the Creole language, and that's how you'll feel the minute you enter this upscale, four-unit gated development. Ideally situated on the southeastern boundary of Seacrest Beach, this graceful group of airy three-story villas nestles right alongside the western edge of Rosemary Beach.
Built in 2006, the units in this upscale development go from A1 to A4. A privately gated courtyard calmed by the splash of a soothing fountain welcomes resident and visitor alike into each open-plan unit. Once you're inside, the beadboard ceilings, rich interior finishes, glowing fireplace and floors of solid heartwood pine will put you right at ease in the 2,150-square-foot, open-plan unit.

The second floor greets you with a living room and eating area alongside a modern gourmet kitchen featuring granite counter tops, Wolf stainless appliances and sub-zero refrigerator. Travel up one flight and you'll find three bedrooms, each with private bath, gracing the unit's third story. An electronic dumbwaiter connects the living area to the two-car garage to make quick work of transporting laundry and sundry items between floors.

Residents of A La Paix can easily access all the amenities at, and its 12,000-square-foot lagoon-style swimming pool will provide welcome respite on any warm day. If you prefer to do your swimming in the Gulf, gates to the rear will take you straight to the beach access trail. Walking isn't required, though, since a tram is available for anyone who'd rather reach the sands in style.

The Village Of South Walton 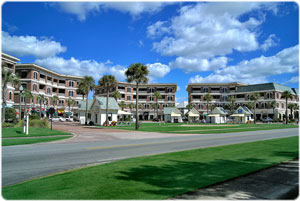 The Village of South Walton is situated at the east end of Seacrest Beach. Located on the north side of 30a, The Village is comprised of eight different buildings known as A-H. Buildings A-G feature commercial space on the first floor with residential units located above. Building H is entirely residential. Buildings A and F are three-story buildings overlooking 30a. Buildings B, C, D and E are all four-story buildings surrounding the fountain area adjacent to 30a. Buildings G and H are both tucked behind the other six buildings. Building G has four stories , while Building H has three stories and rests beside a heated pool that all Village residents have access to. Village of South Walton residents can also enjoy the 12,000 square foot lagoon-style pool in Seacrest Beach. The floor plans of the buildings in The Village of South Walton offers residents a variety of different options. These floor plans range from smaller studio-style units to large four-bedroom, 4/1 bath units.

This community also has homes. If you are looking for a house please check out our Seacrest Beach real estate page.

Map of condos at Seacrest Beach